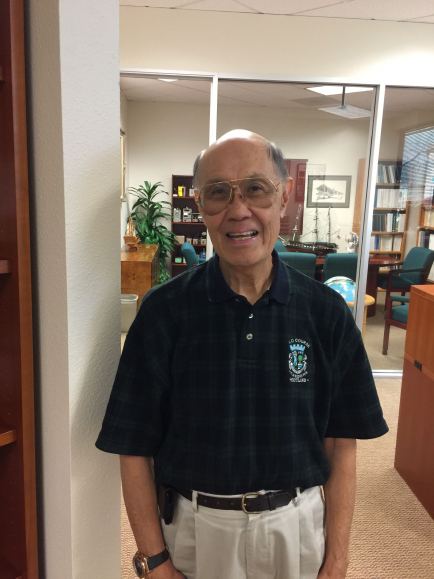 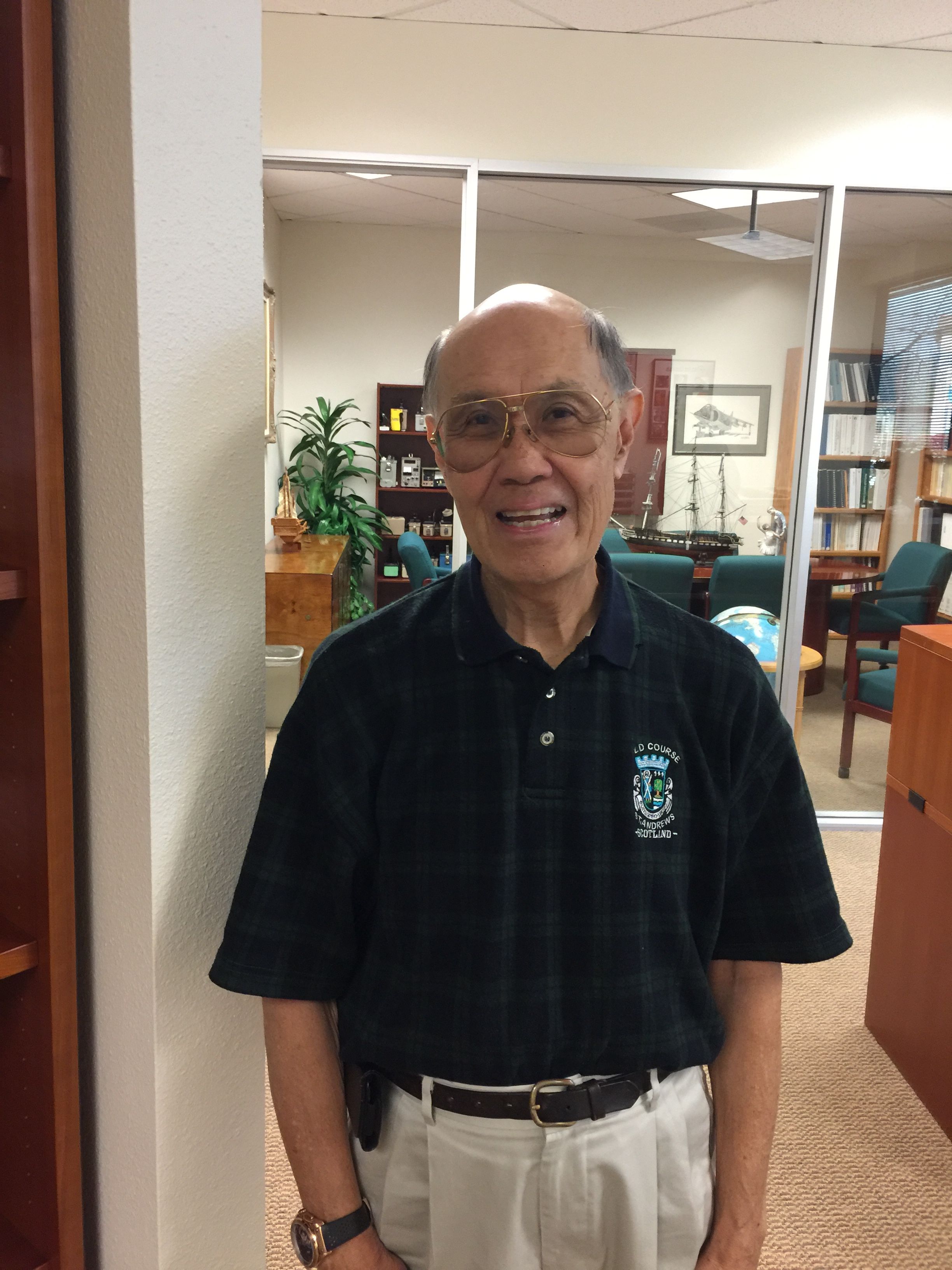 Figure 1: Melton Chew
The Health Physics Society has suffered a great loss with the recent passing of one of the giants of our profession - Melton Chew (Figure 1). Mel was the son of George N. and Alice K. Chew and he is survived by his wife of 35 years, Kelley, children, Brigitte Johnson and son-in law, Randy Johnson, Kevin Chew and daughter-in law, Eileen Chew, Christopher Chew and daughter-in-law, Deanna Chew, brother Calvin Chew and sister-in law, Dorthey Chew and grandchildren, Siera Herring, Piper Johnson, Sawyer Johnson, Allison Chew, Alex Chew, and Lillian Chew. Mel also leaves behind a host of nieces and nephews, friends and colleagues whose lives he touched in so many ways.

Mel earned a Bachelor of Science in Chemistry from the University of California and began his career in 1959 at Lawrence Livermore National Laboratory (LLNL) where he served as Senior Operational Health Physicist and Manager through 1988. Highlights of Mel’s career include: Instituting and leading the Environmental Safety and Health (ES&H) program and the safety design criteria for experimental facilities that separately handled and processed gram quantities of tritium, kilogram quantities of plutonium and uranium, inertial fusion processes, and hazardous chemicals; and ES&H support manager for uranium and plutonium laser isotope separation optical lasers, including the world’s largest and most powerful laser. Mel led Tiger Team reviews of the radiation safety and health physics programs at the Department of Energy (DOE) weapons research and production complex. He was considered a leading expert in understanding the behavior of special nuclear materials and nuclear weapons under accident conditions. He possessed experiential knowledge of past, present, and likely future operational, materials management, and waste management issues facing each DOE weapons production facility and national laboratories, particularly in the areas of operational health physics, operational safety, and criticality safety. He also served as a Senior Health and Safety Coordinator for LLNL-directed projects at Nevada Test Site, and as a Senior Health Physicist with the DOE Nuclear Emergency Search Team. Mel quipped that he had probably witnessed more nuclear weapons tests than anyone else on the planet.

In 1988, Mel left LLNL and became the founder and President of M. H. Chew & Associates, Inc. (CAI). Over the next 32 years, Mel led and mentored hundreds of health physicists, industrial hygienists, engineers, and other safety professionals. Under Mel’s leadership, CAI supported the National Institute for Occupational Safety and Health’s radiation dose reconstruction project as a member of the Oak Ridge Associated Universities Team, the Safety and Mission Assurance Support effort for human flight programs at the National Aeronautics and Space Administration Johnson Space Center, and most DOE facilities and laboratories, including LLNL.

Mel loved to golf (Figure 2), and he and Kelley spent more than 12 months total travelling around the world twice (Figure 3, 4) on cruise ships. 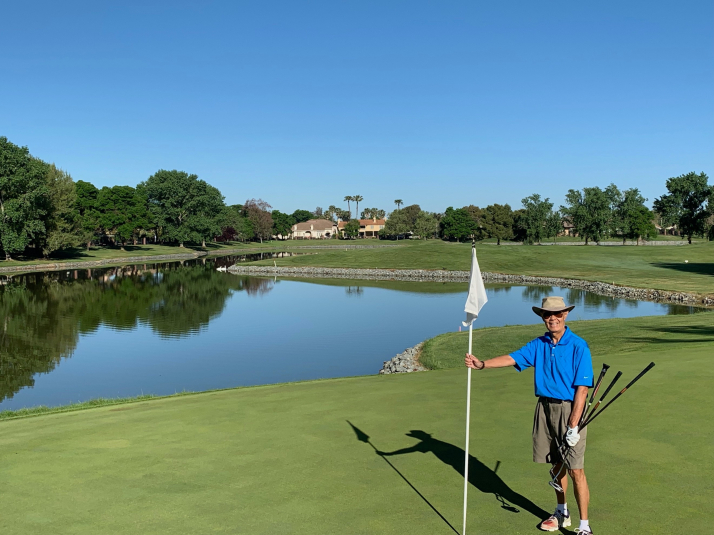 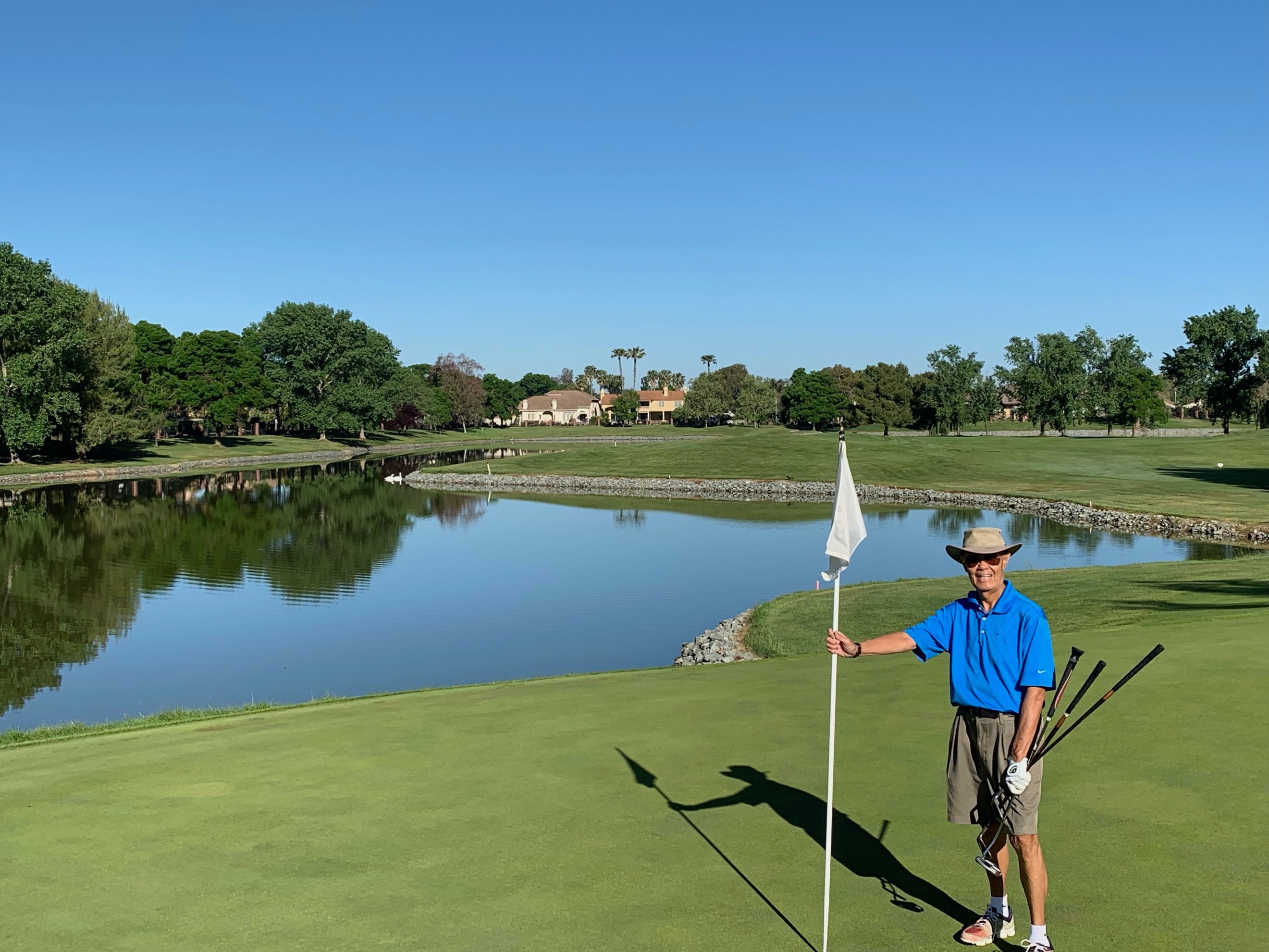 Figure 2: Mel on the green 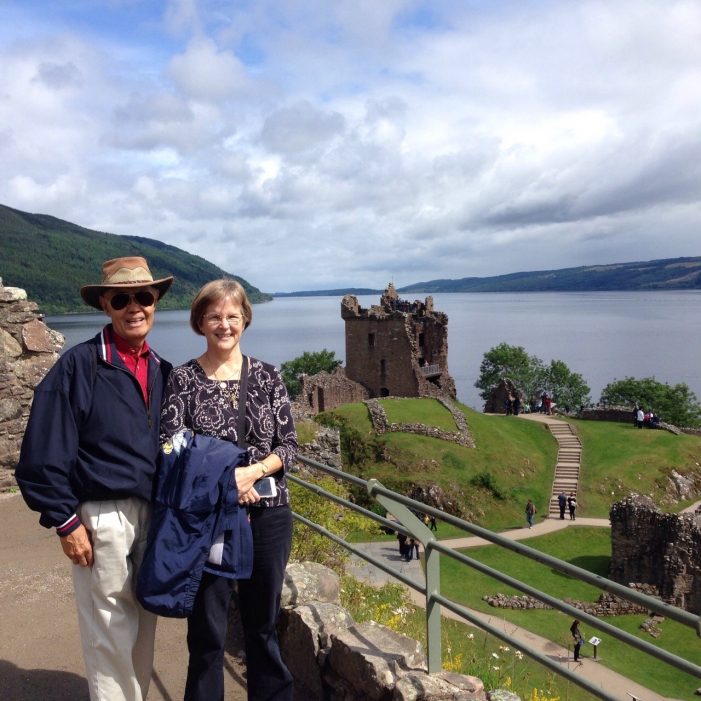 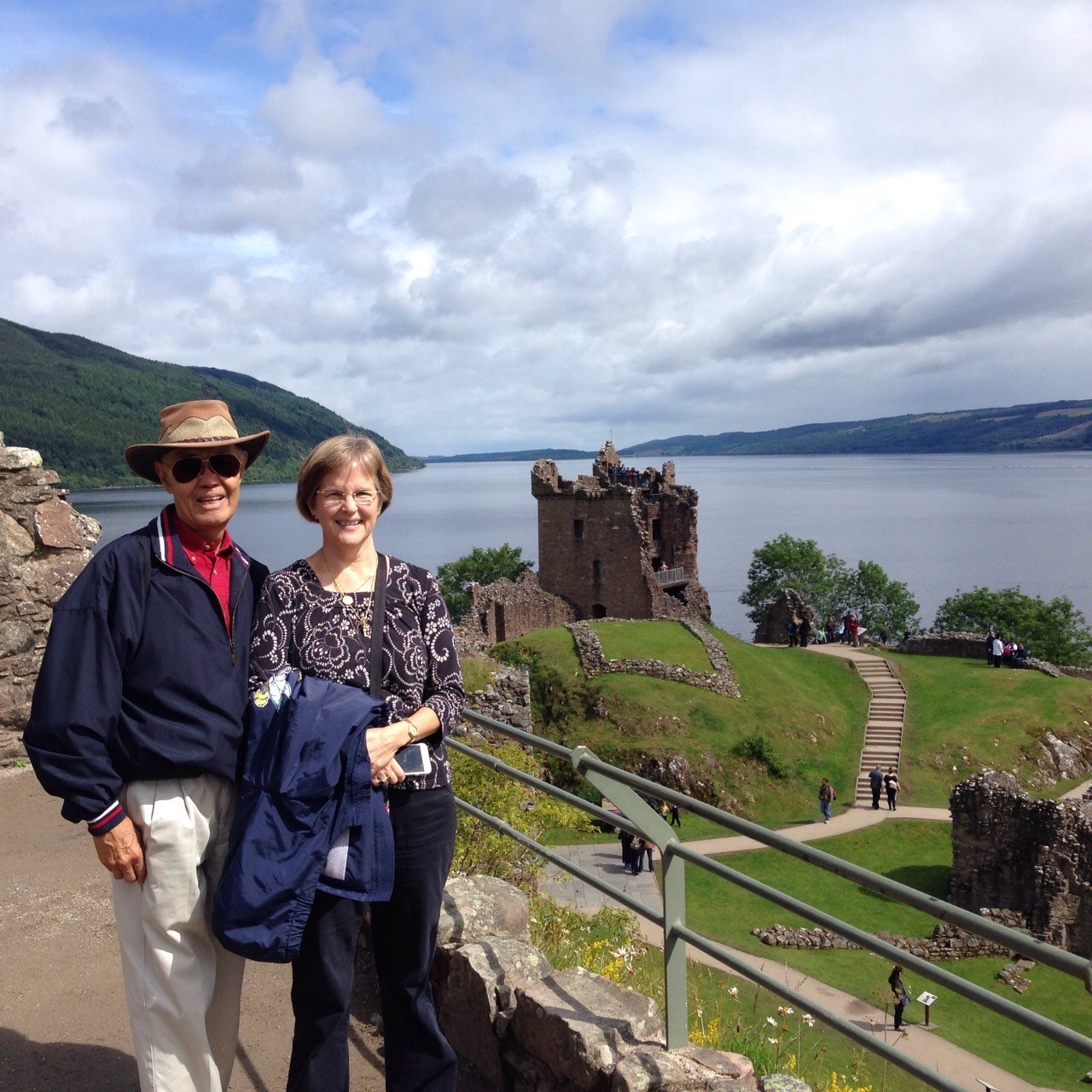 Figure 3: Mel and his wife, Kelley, on one of their many travels. 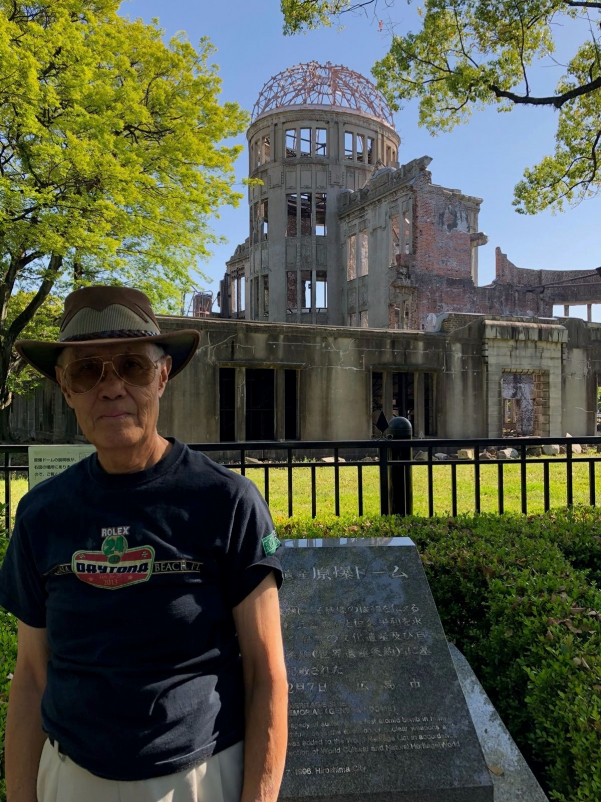 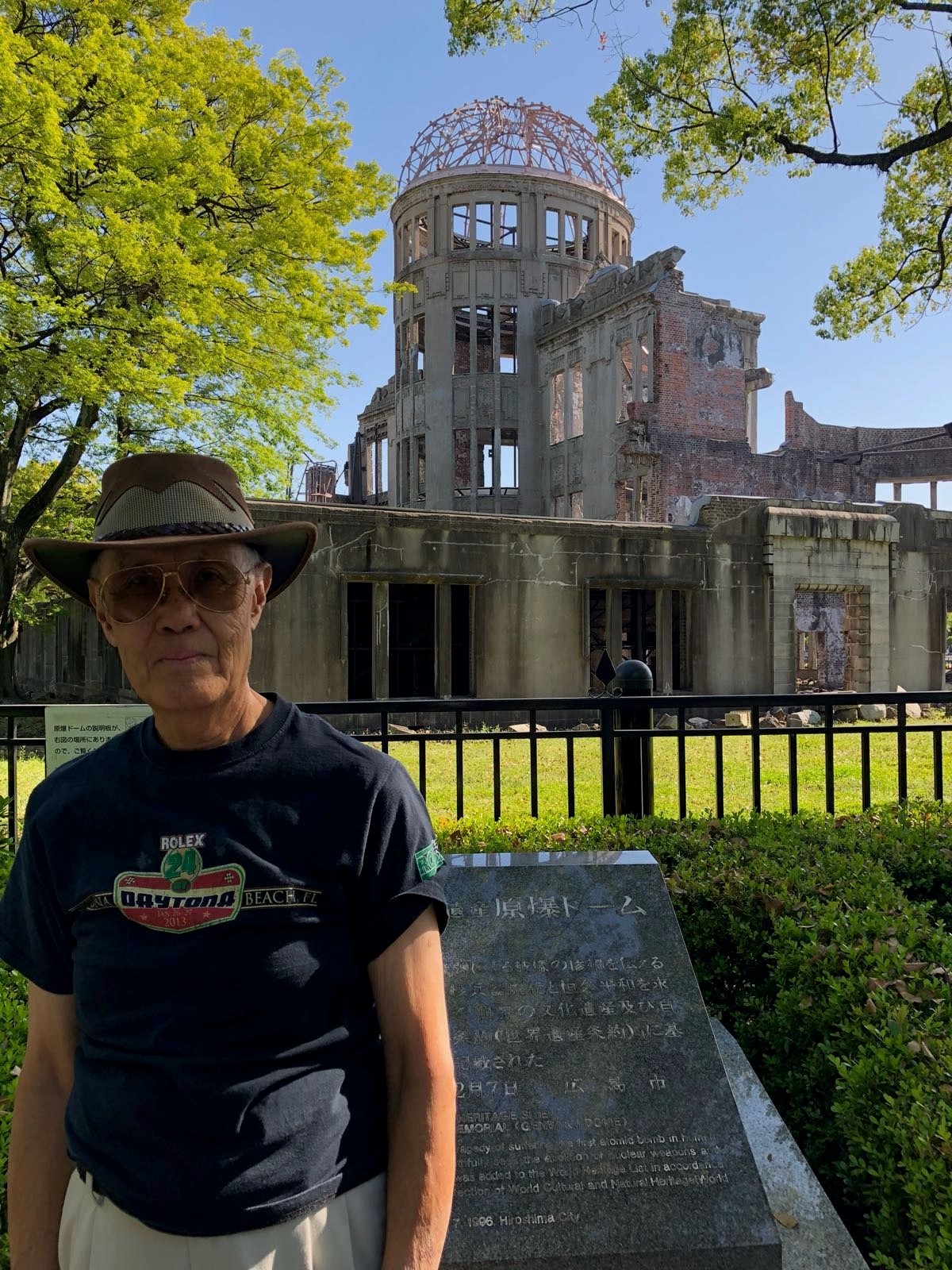 Figure 4: Mel at the Hiroshima Peace Memorial
Mel warmed the hearts of everyone he met, as evidenced by the recollections of some of his colleagues:
Alesia Batiste: Mel was an exceptional employer and he enjoyed telling you about his line of work as a health physicist. The conversations were not always about work but about his travels around the world as well. I’m sure going to miss those interesting stories. There were times after a busy day he would pack up and on his way out of the office he would say “go home”. Of course, I’d respond, “Mel I have work that needs to be done, but I’ll try not to work too late”. This reminds me of how wonderful and caring he was as an employer and I will miss his presence.
Robert Morris: Mel loved to tell stories and had a way taking an embarrassing event (like the time his golf cart rolled in the pond) and turn it into a funny story that made you feel included in his big circle of friends. In 1959, during his first week at the lab, someone in the waste facility gave him steel wool and told him to scrub a piece of D-38 metal until the contamination was gone. The count rate on his Geiger counter never changed. It took him all afternoon to figure out that D-38 was pure uranium and the joke was on him. Mel’s memory worked like a motion picture in his head. He could re-live events and remember names and places and faces with amazing detail. I knew Mel for 41 years and worked for him for a lot of that time. Mel treated me like a member of his family, and I miss him.

Bryce Rich: We met and started working together about 55 years ago with Lawrence Livermore National Laboratory nuclear weapons testing at the Nevada Test Site. We developed a bond and mutual respect which has had a great influence upon each other through the years that followed at LLNL in Livermore and in the M. H. Chew & Associates business he started. My lasting impressions of Mel are that his tasks were always well done, and he had great people skills. Whenever he saw you, it was as if time had not passed because the friendship was strong and you picked up where you left off. Mel always validated others in conversation, and he was very kind and thoughtful. He always lifted others and made them feel important. He had a great memory for names and events. Mel had an ability to express feelings in a sincere way and with illustrations, and he was a great and engaging storyteller. Mel could be trusted – he was a loyal friend, a good and humble man of great integrity, personally and in business. He was an effective businessman and provider, for not only his family, but in providing opportunities for others as well.

Billy Smith: I knew Mel for over 40 years. I initially met him at the Nevada Test Site as he performed scientific Health Physics duties for the Lawrence Livermore National Laboratory related to nuclear weapons testing. He was extremely friendly, knowledgeable, vibrant, practical, down-to-earth and easy to talk too. Over his entire career, he had the uncanny ability to focus and apply his educational, field and worldly experiences to the problems being immediately addressed.

Over our professional careers we supported the weapons testing programs in Nevada, the Pacific Proving Grounds, Mississippi Salt Dome experiment, Rocky Flats and many of the AEC/DOE facilities nationwide. During these times we spent many hours talking about our various experiences. Mel was a great storyteller and his recollection was phenomenal and many times very hilarious.

Mel was a “world traveler”. He enjoyed many cruises and trips to various parts of the world with wife and family. Many of us at Chew and Associates looked forward to seeing some of the photographs that he would send us while they toured. My favorite was him was straddling a crack in the earth’s crust that separated the European and Asian continents (Figure 5).​​​​​​​ 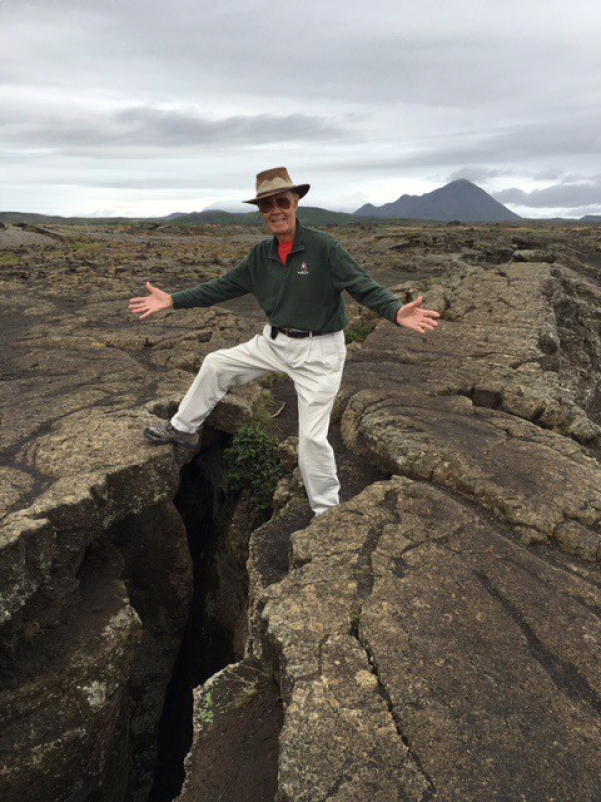 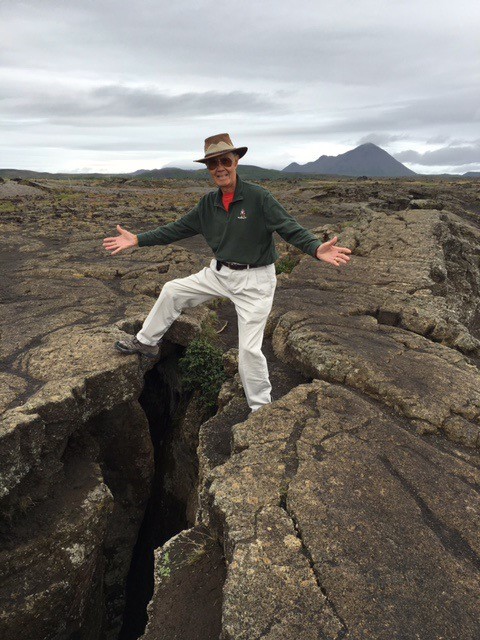 Figure 5: Mel straddling a crack in the earth’s crust
that separated the European and Asian continents.
Mel was always full of life and vigor. His integrity as a person and manager was solid-as-a-rock and unquestionable. As the owner of M. H. Chew and Associates he was loved and admired by all who worked for the company. He will be missed by all that knew him. I am proud to have known him and honored to have been his friend.

Brant Ulsh: While Mel was an exceptional operational health physicist, that isn’t what I will remember most about him. What stood out about Mel to me was his unimpeachable integrity. On several pivotal occasions in my own career, he encouraged me to follow the words of wisdom he had received as a young HP from his friend and mentor, Bryce Rich, “Just do the right thing”. Mel also always took a sincere interest in the people he met and he had a way of putting people at ease and drawing them in with extremely engaging stories from his long and pioneering career. He was more than just a supervisor – he was truly a great friend. I will deeply miss his great, big smile, and his boundless energy.

Bruce Samuels: I first met Mel at the Hanford site way back in 2002 and over these past 18 years, we became very close friends. He mentored me on how to manage a business such as ours and especially to “always keep track of your cash flow”. Being a small, private company, this was very sound advice. In my frequent travels to Livermore, I got to know his lovely wife Kelley and the rest of his extended family. Mel and Kelley were world travelers having visited such exotic destinations as Easter Island (including Antarctica), WW II Pacific battle sites, the Northwest Passage and the Amazon River, to name a few.
On my very first trip with Mel back in 2008, we were meeting in Houston, Texas to visit our employees working at the space center. Our arrangements made, I was to call Mel when I landed and he would meet me in front of baggage claim. Out I come, calling Mel on the way out. “I’m here, I said,” “I don’t see you, said Mel.” As we spoke on the phone for a few minutes, we quickly realized that we were at two different airports, an hour apart. Mel, always one to understand the root cause of a problem, realized that somehow this important detail was lacking a confirmation. I felt bad of course, being my very first trip with the boss. He never brought it up again, but we exchanged itineraries after that. We spent many, many hours discussing everything from food, to politics, to sports. I miss him very much. Rest in peace Mel, my very dear friend!

M.H. Chew & Associates, Inc. is a highly qualified and well respected engineering, analytical, scientific, and technology consulting firm, was founded in 1988 and is a privately owned, small woman-owned business.